Earlier this month Andrew Young from the Letter Box Study Group popped into Radio 2 to answer this important question. Listen to his interview.    … Read More 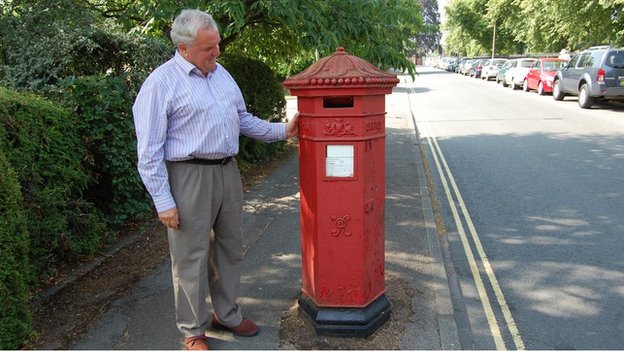 “How often do you give a second thought about the pillar box you use when you go to post a letter? People putting mail in one of a handful of old letter boxes in Cheltenham may not be aware of their historical significance. The town is home to eight “rare” original Victorian… Click here for… Read More

Our Chairman took a film crew from the predominant Chinese state television broadcaster into a typical British city centre to talk about the how the British love their red letter boxes. “There’s a massive campaign quite often if there’s any suggestion of removing a letter box…” Watch the broadcast… Read More

We provided the BBC’s flagship magazine programme (average daily viewers: 5 million) with a package of research, pictures, information and background material for a piece about the trials and tribulations of the first Queen Elizabeth II letter boxes in Scotland.… Read More

“The Letter Box Study Group has for many years recorded details of British and overseas letter boxes and publishes a very well produced Newsletter as well as other publications and postcards. The current winter newsletter reflects the vitality of this Group…” Click here for the full article.… Read More

Our Chairman, Andrew R Young, gives a live interview to the Sean Styles Show on location at an historic and rare pillar box in the city of Liverpool. Listen to the broadcast (scroll to the 2 hr 10 min point).… Read More

“Robert Cole, from the Letter Box Study Group, says: “There is also one in The British Postal Museum Store in Debden, Essex. Altogether that makes three accounted for, but we have no idea where the other four have gone. They could be still in Liverpool, maybe even in someone’s garden. It’s such a shame, because… Read More

“Yet it is still something of a mystery. Now, to mark the anniversary – and in pursuit of its mission to map and measure Britain’s red breasted beauties – The Letter Box Study Group (for it is they) wants to gather stats and stories about the Liverpool Specials: the wheres, whens, whys and whos.” read more… Read More

Today is republic day in India, celebrating the in

Today LBSG members from across the world are atten

If you've made it your New Year's Resolution to vi